It's 3:00 AM. Your baby is bright-eyed and ready to start playing. You, on the other hand, are exhausted from having already woken up 3 times that night. "They were right," you think. "Maybe I should give this sleep training a go."

Sleep training has become so popular in the last few decades that it's a part of everyday conversations:

It's everywhere. It's in the pediatrician's office, in online forums, on Instagram, and even in friendly conversations with non-parents.

Even though it's liberally spoken of and used, sleep training techniques have not been designed to put your child's developmental needs first.

In this article, we'll cover:

What is sleep training?

Sleep training is the "training" parents give babies to get them to sleep independently. Every family has different expectations of the outcome of sleep training but most aim for "sleeping through the night."

Sleeping through the night has become such a big part of conversations that new parents are forced to develop ambition for it.

How is she sleeping? Does she sleep through the night yet?

How is sleep training done?

Sleep training mostly involves letting children cry themselves to sleep. Although there are several "methods" with varying levels of parental support, it all boils down to the idea that if babies are not given immediate attention when they cry for help, they will eventually "learn" that it's okay to sleep by themselves.

Where did sleep training originate from?

The term “sleep training,” meaning “training the baby to fall asleep independently,” first appeared in 1997 but the idea of having babies cry to sleep has been around since the 1800s.

In the 1830s, German doctors were known to suggest parents not rush to calm a crying baby and see if they will settle on their own. This suggestion was not radical though. Some doctors recommended parents to soothe their babies—both day and night—using gentle rocking, nursing, etc.

In the 1880s, mothers were advised not to touch their babies too often because germ theory and transmission of infections were hot topics.

The term "cry it out" first appeared in 1894 in Emmett Holt's book The Care and Feeding of Children.

“How is an infant to be managed that cries from temper, habit, or to be indulged? It should simply be allowed to ‘cry it out.'”

—from The Care and Feeding of Children.

But even before that, in the 1830s, parenting handbooks had started to recommend similar things. This was mainly related to the industrial revolution and the fact that women had started to become a part of the workforce.

12-hour shifts had become common. The cost of child-rearing outside of the home was high and sleepless nights were decreasing women's productivity. The only way for mothers to keep up was by night weaning. So sleeping through the night had started to become high in demand.

In the 1920s, behaviorist John Watson, the president of the American Psychological Association, warned parents that maternal love would make children dependent. He had no science—not even a single experiment—to back his claims but his recommendations found their way into government pamphlets.

In these pamphlets, mothers were advised to hold the baby quietly and immediately stop if their arms felt tired because babies "were never supposed to inconvenience adults." A baby older than six months was advised to be taught to silently stay in the crib, otherwise calming them would mean wasted time.

Behaviorists encouraged parents to teach babies that their needs—feeding or comforting—would not be met on demand. Adults were advised to be "be in charge."

Since then, with varying degrees of crying and parental support, various methods have been offered to parents to "train" babies to sleep independently. Here's a list of all methods sorted by (ascending) level of harshness.

How was sleep before sleep training?

It seems that sleep training methods have been around for only 200 years, in line with the industrial revolution and the changes it caused in social structures.

But what about before? How did babies—families—sleep before the 1800s? The short answer is: together.

For the vast majority of the human history, people lived and slept in communes. Hunter-gatherers—and even many non-Western cultures today—are known to rely on breastfeeding for 2-5 years, co-sleeping, responsiveness to baby's cues, and communal social support for mothers.

F0r 30 million years, social mammals have executed intensive parenting. This type of parenting has been crucial for the proper development of the species.

The importance of parenting in the human species

Humans have a special place among all other social mammals because human babies are born with a brain 25% the size of its mature version. If human babies could stay in the womb for 18 more months, they could resemble newborns of other species in terms of skills and independence.

In addition to being a 200-year-old "innovation" that's not suitable to how our bodily systems evolved, there are several reasons why you should avoid sleep training. Below we discuss 5 of them.

Why you should avoid sleep training

1) Babies sleep differently than adults and it's normal

Sleep is made up of cycles. We wake up in between cycles but we put ourselves back to sleep without paying attention to it.

Baby sleep is made up of shorter cycles and is more "shallow" because babies need to be able to wake up to express vital needs—such as hunger. Sleep cycles get longer and more consolidated as babies grow but it's a process that can take at least 2 years.

Most people think sleep should be taught but it's false. Children's bodies already know how to sleep. Imagine how your baby slept and woke up while still in the womb.

What separates the real world from the womb is that the real world is filled with stressors that make it hard for our nervous system to enter "sleep mode." What gets us to a sleepy state is our self-regulation skills. Babies have only a few of those skills because their brain structures that enable these are under construction.

Sleep is an unknown territory for babies. It is a state of total vulnerability. If we were living in the wild, sleeping in unsafe settings would cost us our lives. Babies are coded to survive. For the same reason, they want to be safe in their sleep.

Read more: Why do babies fight sleep and how brain knowledge helps

The adult human brain is too large in proportion to the body. For us to deliver the head vaginally, babies have to be born while brains are underdeveloped. It's safe to say that human babies are born "half-baked."

💡 A lamb can walk minutes after it's born but human babies need 9 additional months to match the mobility. For bone development and foraging capacities, 9 more months are needed.

Because of the underdeveloped state of newborns, human parenting has evolved to be an intense experience. Babies need us to touch them, hold them, gaze into their eyes and play with them in the first three years so that their brains develop to their full potential.

Stress is one of the defense systems of our bodies. When we are under stress, our body takes necessary precautions to either get us out of the situation (flight) or react against stressors (fight).

Babies are born with a developed hippocampus and amygdala. Hippocampus is responsible for learning and long-term memory, and the amygdala is responsible for memory processing, decision-making, and emotional responses. These responses include our fight-flight-freeze reactions to stressful situations.

Baby brain does what it has to do. It learns and it reacts to danger.

This means that babies are wired to feel fear and other strong emotions when they are under stress.

Read more: Why do babies fight sleep and how brain knowledge helps

Sleep training is claimed to be "helping" babies sleep better. But even if sleep-trained babies do seem to be sleeping with no fuss, it doesn't necessarily mean that they are sleeping peacefully.

In a 2012 study, babies who were sleep trained showed no stress in their behavior but their cortisol (stress hormone) levels kept on rising even after they went to sleep. What's more, because these babies showed no signs of distress, the mothers' cortisol decreased, causing an asynchrony between mothers' and babies' stress levels.

Babies wake up often and it's normal. But sometimes, there really are some red flags to investigate further. These might range from physical illnesses to missing parts within the parent-child relationship. Fitting all solutions under the blanket term of "self-soothing" (a term sleep trainers love) causes all these potential disruptors to be ignored.

Plus, even if self-soothing was the ultimate solution, it can't be forced. Self-soothing (self-regulation) is a set of skills that follow the development of the brain and nervous system and that needs to be acquired within a relationship.

Babies hate to be alone and that's developmentally appropriate. Leaving them alone to cry is painful to them. Sleep training is a painful process for parents too. It's against how our bodies have been developing for over 30 million years. Spare yourself and your baby of the pain. Please, please, do not sleep train your precious baby.

Sign up to Apparent for free and start learning about how your parent-child relationship influences your baby's sleep.

A while ago, a dear Twitter friend confided in me with a parenting challenge she had been having. Her 3-year-old son always seemed bored. He was also clingy. When his mom offered an activity, he refused to play for longer than 5 minutes. Living in a 9-person family, he'd play 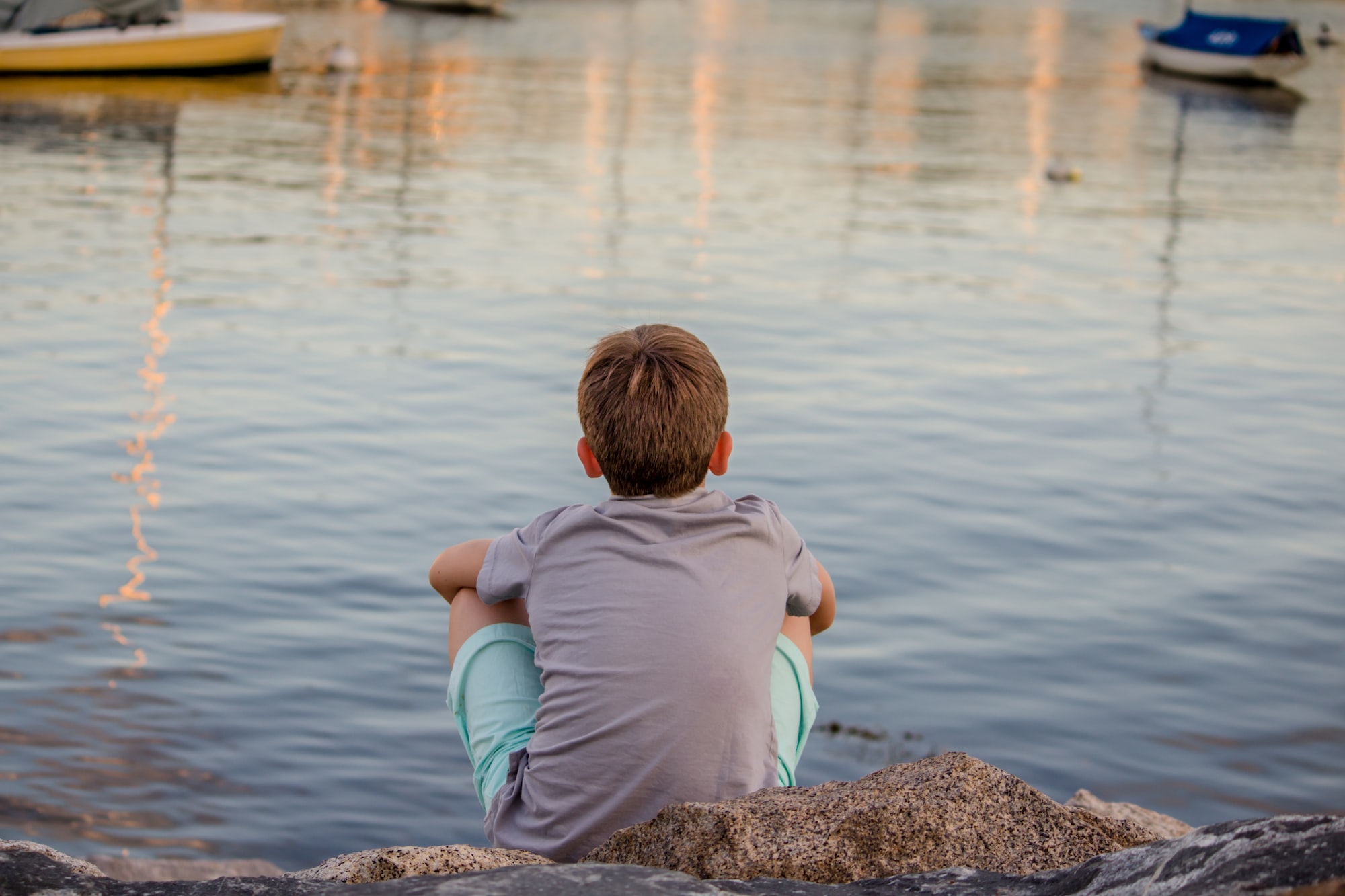 It's hard to fight our urge to entertain our kids when we hear the sentence, "Mom/Dad, I'm bored!" But some boredom is great for kids. Here's how to approach it.

When I hit a parenting dead end, it's rarely about my kid—it's often about me. I see parenting as an opportunity for deep internal work. No wonder it's so hard! No meaningful work is easy. But there's one simple tool at our disposal: embracing the imperfect. Mess, tears, and